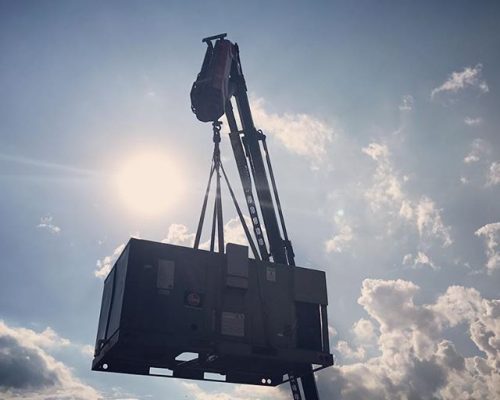 Excessive Load
In the case of excessive load, the temperature drop of the air through the coil will be less, because the unit cannot cool the air as much as it should. Air is moving through the coil at too high a velocity. The excessive load raises the suction pressure. The refrigerant is evaporating at a rate faster than the pumping rate of the compressor. If the system uses a TEV, the superheat will be normal to slightly high.
If the system uses fixed metering devices, the superheat will be high.

Low Ambient Temperature
In this case, the condenser heat transfer rate is excessive, producing an excessively low discharge pressure. In addition, the reduced system capacity will decrease the amount of heat removed from the air.
This starts a reduction in system capacity.
The amount of drop in the condenser ambient air temperature that the air-conditioning system will tolerate depends on the type of pressure-reducing device in the system.
Systems using fixed metering devices will have a gradual reduction in capacity as the outside ambient drops from 95°F down to 65°F.
Systems that use a TEV will maintain higher capacity down to an ambient temperature of 47°F.
The most reliable means is control of air through the condenser via:
Dampers in the airstream
The condenser fan cycling on and off
A variable-speed condenser fan
A combination of these components
Do not attempt to charge a fixed metering device system below 65°F, as system operating characteristics become very erratic.

When the outside air temperature rises on a hot day, the temperature of the air entering the condenser will be higher.
This also increases the condensing temperature and pressure of the refrigerant vapor.
Due to the high ambient temperature, the discharge pressure will be high.
The amount of superheat produced in the coil will be different in a TEV system as compared to a system using a fixed metering device.
This table shows the superheat that will be developed in a properly charged air-conditioning system using a fixed metering device.

Refrigerant Undercharge
With a shortage of refrigerant in the system, less liquid refrigerant enters the evaporator coil to pick up heat, creating a lower suction pressure.
There will be less vapor for the compressor to handle and less heat for the condenser to reject, leading to a lower condensing temperature and discharge pressure.
The amperage draw of the condensing unit will be slightly less than normal.

Refrigerant-Overcharge TEV Systems
The valve will attempt to control the refrigerant flow into the coil to maintain the superheat setting of the valve.
The extra refrigerant will back up into the condenser, occupying some of the heat-transfer area that would otherwise be available for condensing.
As a result:
The discharge pressure will be slightly higher than normal
The liquid subcooling will be high
The unit amperage draw will be high
The suction pressure and DX coil superheat will be normal
Excessive overcharging will cause even higher discharge pressure and hunting of the TEV.

Refrigerant Overcharge in Fixed Metering Device Systems
The amount of refrigerant in the fixed metering system has a direct effect on system performance.
An overcharge has a greater effect than an undercharge, but both affect system performance, EER, and operating cost.
The effect of overcharge produces a high suction pressure because the refrigerant flow to the DX coil increases.
Suction superheat will decrease because of the additional quantity to the DX coil.
At approximately 8–10 percent of overcharge, the suction superheat becomes zero and liquid refrigerant will leave the DX coil.
This causes flooding of the compressor and greatly increases the chance of compressor failure.
The discharge pressure will be high because of the extra refrigerant in the condenser.
Liquid subcooling will also be high for the same reason.
The amperage draw will increase due to the greater amount of vapor pumped as well as the higher compressor discharge pressure.